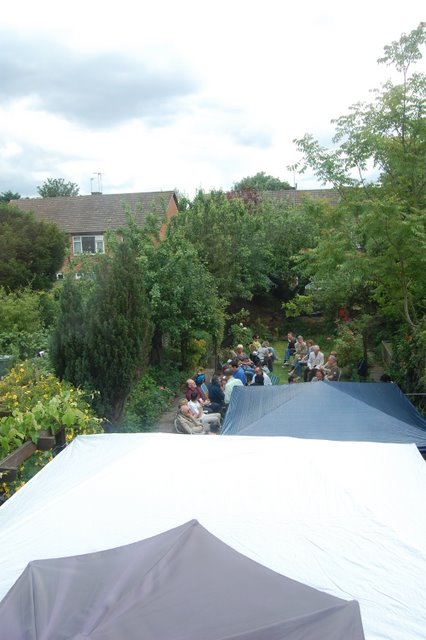 This year we were well prepared for the heavy rains forecast – but the sunny weather held out and a wonderful garden party was enjoyed by all. 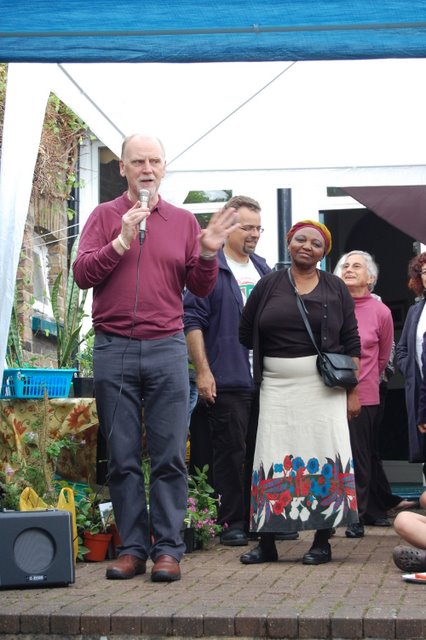 Tony Dykes, director of ACTSA, speaking about the 50 year celebrations of the Anti Apartheid Movement. 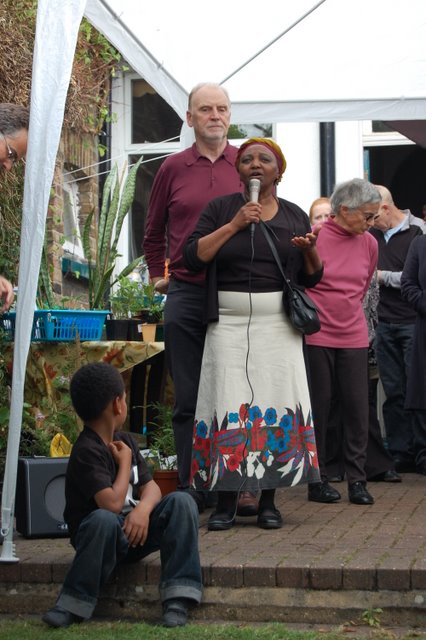 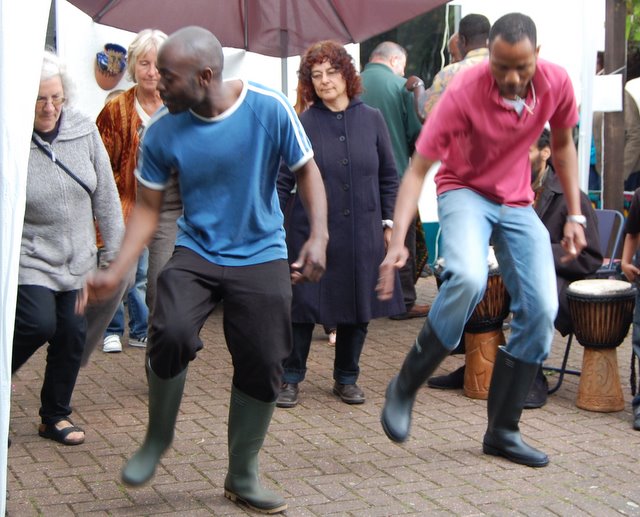 Makola and Elijah demonstrating the gumboot dancing they learned on an exchange visit to Vosloorus in 2000 – and people joining in!

As a precaution we put up two gazebos on Sunday June 7th   but the forecast rain stayed away when we held our Annual Fundraising Garden Party at Gerard and Naima Omasta-Milsom’s garden in Walthamstow.  The food that we offered went down a treat – especially Naima’s signature dish – authentic cous-cous – which was a triumph.Tony Dykes, the director of Action for Southern Africa, gave a speech celebrating 50 years of the Anti Apartheid  Movement. He recalled how it was set up in 1959 to demand  an end to apartheid in South Africa by means of sanctions and political isolation and changed the world for the better. In 1994 after the first democratic elections in South Africa the movement regrouped as Action for Southern Africa (ACTSA), which by working with the people of Southern Africa to overcome the legacy of apartheid aimed to build a future of rights, justice and democracy for the region.Our Chair Mmapula Tladi-Small then spoke about her recent trip to South Africa during which she visited Thuto Lesedi School where our sponsors now support 50 mostly AIDS orphans through the school by paying their school fees. She was able to report that most of the Matriculation class students had successfully gained their diplomas. She also reported on the feeding programme to which Thuso contributes. In comparison to previous visits when she had found the students lethargic due to hunger they were now much more lively and engaged in classes and positive about their futures. The teachers assured her that without Thuso’s support the feeding programme could not continue. Mmapula ended by thanking all our supporters for their help.

Trustee Tania Collins then introduced Makola and Elijah who demonstrated Gumboot dancing that they had learned on a visit to Vosloorus in South Africa in 2000. He explained that the dance was originated by South African miners. Makola got us all chanting the rhythm and several people joined in the dancing – without the gumboots!

Niles entertained us with a drumming session which was a enjoyed by all and Kwame did his stuff with the raffle which was a great success.

There was a variety of plants on sale as well as beaded jewellery hand-made by a Women with AIDs Co-operative.

The event raised over £1,000 which will help us to continue support for the feeding programme at the school.

Waltham Forest Thuso in South Africa thanks everyone who attended the Garden Party and particularly the children who donated books for the Community Heart Charity to send to South African school libraries.